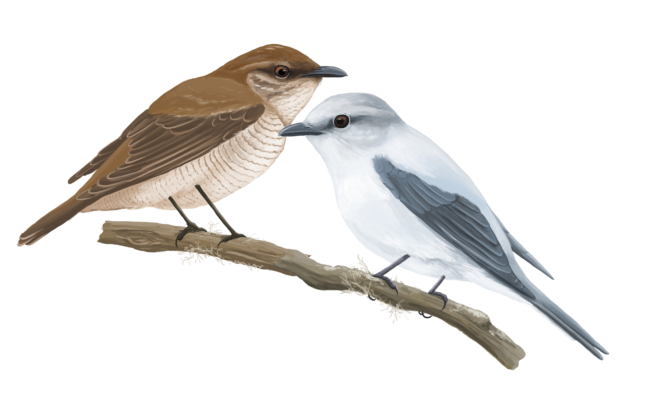 Black and Brown rats and Domestic cats have all been introduced to Reunion island by man and are important predators of the cuckooshrike. Studies have shown that 95% of the species’ nests are predated by rats.  The introduced Red-whiskered bulbul Pycnonotus jocosus is also a threat to the species.

Integrated method of Invasive alien species control: A participative plan of deratification by using “Tuit-tuit” squads of volunteers trained in rat control and necessary security will work under the supervision of SEOR (Société d’Etudes Ornithologiques de la Réunion) staff. A framework for eradicating cats will be used throughout the 1000 ha. Which are at the core of the Reunion cuckooshrike’s habitat. A detection system will be set-up in order to confirm the presence/absence of cats in the area. The impact of the Red-whiskered bulbul on Réunion island endemic bird species will be evaluated and a method of controlling the species developed. Enhansing and translocation: Birds will be caught and translocated between the two presently known sites in order to favour gene flow between the two populations and thus strengthen present numbers within the two separated groups. In order to create a new geographical population of the species, that has at present a very restricted range, individual birds will be reintroduced into an area where the species was known to occur previously.

Correspondent for species conservation at the SEOR (Société d’Etudes Ornithologiques de la Réunion)  and coordinator of the “Tuit-tuit” team.

What do the people of Reunion think of the “Tuit-tuit” (Reunion cuckooshrike)? They consider it to be part of their local heritage even though they have no particular interest in the species. Tourists visiting the Roche Ecrite know that it’s a rare bird and many hope to see it when they come. Can you give an emblematic detail of the species?   Its song. It resounds loudly within the forest. Its Creole name is an onomatopoeia as is that of the Tek-tek (Reunion stonechat). The “Tuit-tuit” is very difficult to see but easily heard. It is a familiar sound to any person who has spent any time in the forest, leaving a memorable souvenir.   How has its population fared recently? Seven pairs were present in 2003 when the SEOR started to work on the species’ conservation. There are 40 at present. The population has increased 5-fold and its habitat covers between 10 and 20 km². The deratification zone is 13 times larger than 10 years ago. Today the “Tuit-tuit” occurs over an area of 2000 hectares. What are the main threats and the reasons for its disappearance? Mainly rats and feral domestic cats. Overall the species was probably present above 800 m in all of the relict forest. Man’s arrival on the island completely transformed the forest by clearing it. Everywhere the locals call the “Tuit-tuit” the “imbecile bird” as it readily approaches humans and is easily captured. What do you want from the LIFE BIODIV’OM program? Succeed in the translocation of the “Tuit-tuit” to a massif where it occurred in the past. Having two geographically separate sites would eliminate the risk of fire destroying both sites at the same time. I also hope that deratification efforts will be made safe and that several core populations will be created thus ensuring the species’ future and change in its IUCN red list status.