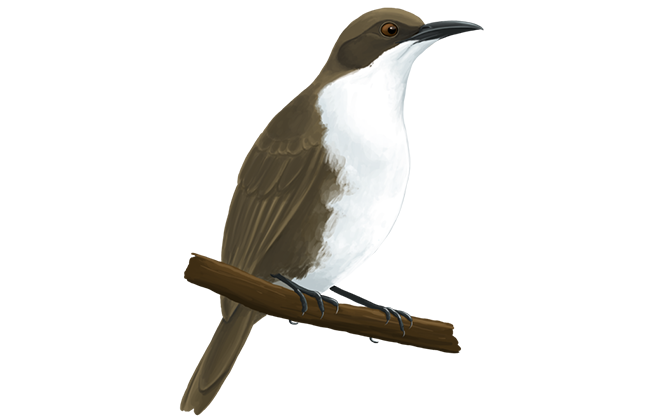 The species is confined to an area of about 5 km² with some wooded areas, isolated from the rest of the forested areas to the west of the peninsula by the presence of agricultural land which prevents extension of the species’ habitat.

Caravelle peninsula fishermen use cage-traps that they make on-site using small branches cut from the natural habitat and in a protected area. Other than the fact that this is forbidden, the branches are used as a support for the birds nest.

The Black rat and Small Indian mongoose, both introduced by man, are both important predators of the White-breasted thrasher. Other species such as feral cats and Common opposums are also an important threat. 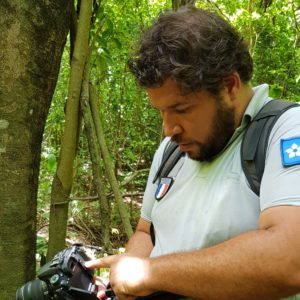 For how long have you been working with this species?

For the past five years.

What do the local people think of the species?

Have you an amusing fact concerning this species?

Some local people living in proximity to the White-bellied thrasher call it the “roi bwa” (king of the forest) as it is thought to “dictate its law” to other species, to dominate them.

How has the species fared since you’ve been following it? What figures do you have today?

Before I arrived there was thought to be 200 breeding adults within the Caravelle nature reserve. The latest estimates tend to show that the population is either stable or slightly increasing.

What are the main threats and the reason for its decline?

The main reason for its decline is habitat destruction. This reduction is due to people increasingly occupying the coast, in the trasher’s habitat. Today, the main threats are still human development and the presence of pest species such as rats, the mongoose as well as the Common opossum (Didelphis marsupialis) or feral cats that prey on both nests and juveniles.

What do you want from the LIFE BIODIV’OM programme concerning the conservation of this species?

We should especially like to see the elaboration of a programme to reduce the thrasher’s predators that would allow the species to recolonise our islands coastal zone.