Tsarasaotra Park, a fragile haven of peace for Madagascar pond herons in Madagascar!

This park, located in Antananarivo, the capital of Madagascar, is one of the last refuges for the aquatic avifauna in Madagascar. The first private site classified as a Wetland of International Importance by the RAMSAR convention, it is however subject to many threats, thus weakening the site’s biodiversity. 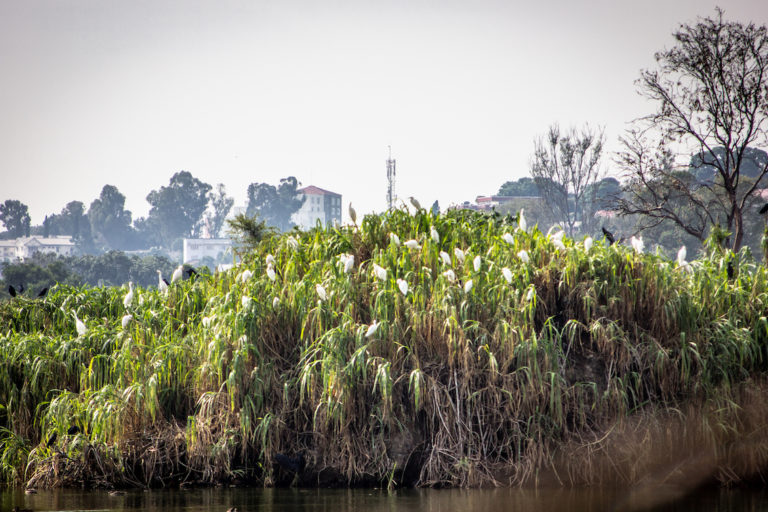 A site rich in biodiversity

Located just 4 km from the city center of the capital, this private park belongs to the Ranarivelo family who still manages it. A 27 hectare green setting made up of two lakes, various islets and a small eucalyptus forest, the site presents many species of birds to the delight of many ornithologists and university researchers.

In total, 49 species of birds have been recorded on the site, some living on the site, others passing through or only coming to reproduce during migration. Within the site, it is therefore possible to observe the Madagascar Wagtail Motacilla flaviventris, endemic to Madagascar, and the Madagascar pond heron Ardeola idae, a small heron endangered, which breeds only in Madagascar, Mayotte, Europa and Aldabra. Other species of herons such as the Cattle egret Bubulcus ibis and the Humblot’s heron Ardea humbloti are present here. Hundreds of pairs of Great egrets Ardea alba can also be seen nesting on top of eucalyptus trees.

The threat of the capital

Only a few kilometers from Antananarivo, the development of the capital of Madagascar and its 1.6 million inhabitants represents a massive threat to the park and the birds present on the site of the appearance of various kind of pollution.

With heavy road traffic and the presence of many industries, the capital registers a very high level of air pollution with particulates amounting to 157 micrograms per cubic meter, which is expanded above the recommended limits of 20 micrograms per cubic meter. UNICEF estimates that 20% of deaths in Madagascar are linked to pollution. For example, some specialists from the Durrell Wildlife Conservation Trust warn that birds also breathing air laden with toxic particles must also be affected by this air pollution.

Located in the center of a basin surrounded by several urban districts, the park is subject to wastewater discharges, loaded with plastics and other harmful products despite the filters installed by the managers, these filters sometimes being deliberately destroyed by passers-by to let the waste evacuate. Plastic is a real threat to birds and numerous studies have shown the fatal consequences of their ingestion on these species.

Chemical pollution of the park could ultimately have a severe impact on the food resources of birds (invertebrates, crustaceans, etc.) and thus impact the avifauna present on the site.

Proximity to the city brings many noises with consequences on the health of humans but also animals, resulting mainly in reproductive disorders in birds as well as more important vulnerability to predators.

These nuisances impact the sleep cycle of species but also prevent birds from communicating, disrupting the transmission and reception of birdsongs.

For more information: link to the original article