The LIFE projects of the LPO presented at the “Fête de la nature” in Fouras city!

On the occasion of the “Fête de la Nature”, from May 18 to 22, an event around nature and the garden was organized on May 18, in Fouras (17), where the LPO held a stand to present European LIFE nature projects to the general public. The opportunity for the LPO to promote the LIFE funding program of the European Commission which celebrates its 30th anniversary on May 21, 2022 and which has contributed to the financing of many projects carried out by the LPO. 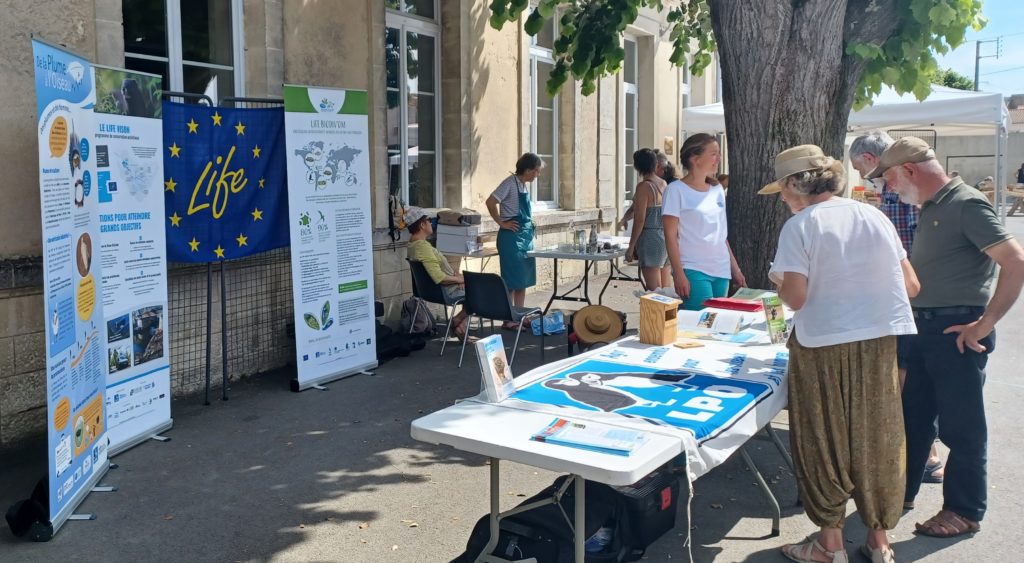 Presentation of the LIFE program and LIFE LPO projects at the Fête de la Nature in Fouras on May 18, 2022 – LPO

LIFE projects coordinated by the LPO

During this day, the European LIFE BIODIV’OM and LIFE VISON projects were highlighted:

The Life BIODIV’OM (2018-2023) is a project set up in 5 overseas territories in partnership with 6 local structures with the aim of protecting three species of birds, two species of groupers and a rare habitat, by acting against invasive alien species, by improving the protection of their habitats and by intensifying the knowledge necessary for better protection and conservation of these species. For more information: www.lifebiodivom.fr/en

Life VISON (2017-2022) is a project deployed in the departments of Charente and Charente-Maritime in partnership with CD17 and GREGE with the aim of ensuring the preservation of the European mink, one of the three most endangered mammal species in France, by improving knowledge of the species, securing its habitat and fighting against competing invasive species. For more information: www.lifevison.fr/en

The LPO also coordinates two other LIFE projects in order to:

The Life GYPCONNECT (2017-2022) is an ambitious project deployed in Occitania, Auvergne Rhône-Alpes and Provence-Alpes-Côte d’Azur, in more than 11 departments with nearly 8 partners with the aim of strengthening the Bearded vulture population by creating new population centers in the Drôme and the Massif central and by encouraging the movement of birds from these centers between the Alps and the Pyrenees.

The Life SeaBil (2021-2024) is a transnational project set up in France, Spain and Portugal and which aims to protect seabirds from plastic pollution by collecting data on their impact, reducing the negative impact of waste collection on biodiversity and working to reduce it with local authorities.

Since 1992, the LIFE (Financial Instrument for the Environment) program has been the financial tool of the European Commission which supports projects in the fields of the environment and climate. These projects are called “LIFE projects”.

It is aimed at promoters of public and private projects and aims to promote and finance innovative projects relating, for example, to the conservation of species and habitats, soil protection, improvement of the quality of air or water, waste management or mitigation or adaptation to climate change.

Since 1992, around 5,000 LIFE projects have been funded across Europe. On May 21, 2022, the European Commission is celebrating the 30th anniversary of the LIFE funding program. On this occasion, many events are organized throughout Europe.

To find the events organized: www.lifeis30.eu