On Monday, October 26, 2020, the PNRM organized a monitoring committee to bring together the partners and naturalist experts concerned with the territory on the theme of IBAs (Important Birds Areas). The opportunity for participants to review together the methodology developed in Reunion Island and Guyana during the Life + CAP DOM project (2010-2015). 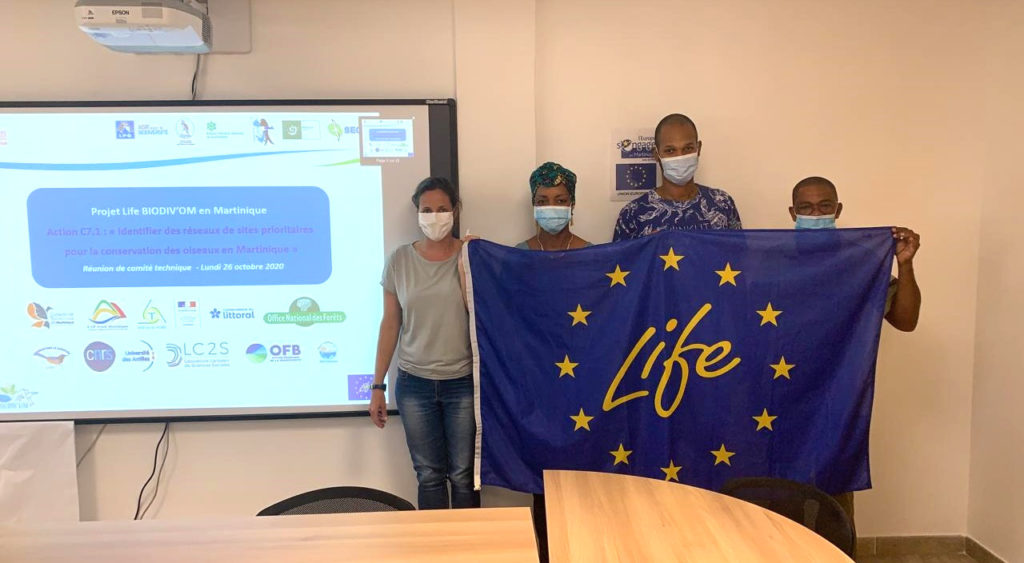 Monitoring committee on the theme of IBAs in Martinique © PNRM

This method is based on the analysis of the distribution of high-stake species in order to map and characterize priority sites for the conservation of avifauna. It thus contributes to the Strategy for the creation of protected areas in the Overseas Territories, as well as to the Ecological Network of Overseas Departments (REDOM). Applied in Mayotte, Saint-Martin and Martinique during Life BIODIV’OM project, it will identify a network of priority sites of community importance in favor of birds. For this, a tutoring mission (https://www.lifebiodivom.fr/en/mission-de-tutorat-sur-la-methode-zico/) was organized by the LPO in April 2019 in the three territories concerned.

The reflections carried out at the start of the week made it possible in particular to address the following points: geographical scope of the study, local criteria for identifying IBAs, lists of bird species observable in Martinique, spatial analyzes and niche models ecological adapted to local conservation issues.

Possible solutions were also proposed concerning potentially eligible sites at the scale of the territory, in particular in the North-Caribbean sector of the island: cliffs of Bellefontaine ; western slopes of Morne Rose; natural spaces near the perimeter of the UNESCO Property (playing the role of ecological continuity between Mount Pelée and the Pitons du Nord), etc.
Discussions will continue with all the players who were unable to attend this meeting, with the aim of refining the reflections launched and validating the first stages of the methodology for identifying these IBAs. In order to meet the objectives set within the framework of this action, the PNRM and its partners are mobilizing so that the work in progress can lead to the regulatory designation of at least one of the sites identified by the end of the project.

The notion of “ZICO” in French (“IBA” in English, for Important Bird Area) refers to an international scientific inventory (Birdlife.org) aimed at identifying the most favorable areas for the conservation of wild birds. Within the European Union, the term ZICO stands for “Zone of Community Interest for Birds”, or even “Zone of Community Importance for Birds”.
To be classified as a ZICO/IBA, a site must meet at least one of the following conditions:
• be the habitat of one or more population (s) of species (ies) whose conservation status is recognized as being unfavorable at the international level;
• be the habitat of a large number or concentration of migratory birds, coastal birds or seabirds;
• be the habitat of a large number of species with a restricted biotope.

Generally speaking, IBAs aim to ensure the conservation and management of species.